Remote sensing imagery and pattern recognition algorithms, such as support vector machines, and deep learning models, are increasingly used to map flood extent. However, current models rely on massive human-annotated training datasets in order to train a flood classification model; this is termed “supervised” learning. The need for real-time flood extent mapping and the high expense of data annotation point to a need for “unsupervised” methods for feature extraction with as little human effort as possible.  As such, our lab has committed to developing an unsupervised learning method for real-time flood extent mapping and damage assessment based on the state-of-the-artwork in remote sensing and deep learning several years ago since Bo Peng, a Ph.D. candidate leading this effort, joined my lab. Through a series of research activities and scientific exploration, we are getting closer and closer to our goal.

For details about this work, please refer to our paper here

Next, we enhanced PSNet models with a self-supervised learning framework for object-based urban flood mapping without laborious training data collection (Figure 3). Similarly, this framework was evaluated for two flood events in the United States: Hurricane Harvey (2017) in Houston, Texas, and Hurricane Florence (2018) in Lumberton, North Carolina. Results show that the method provides strong performance, and robust generalizability, especially the model with spectral filtering and spatial filtering. The evaluations of F1 and IoU (Intersection over Union, also known as the Jaccard Index) associated with the Florence flood were lower than those with the Harvey flood. These differences were due mainly to different degrees of non-flooded changes between the bi-temporal data corresponding to the Harvey and Florence floods over different study areas, respectively. The Florence final flood maps contain a higher rate of false positives (FPs) compared to the Harvey final flood maps. Potential causes include: (1) many FPs in the Florence final flood maps consist of pixels with spectra similar to those of floodwaters such as patches that are wet but not flooded, leading to misclassification in spectral filtering; and (2) quite a few FPs in the Florence final flood maps are mixed and connected with TPs, which were not removed by spatial filtering. 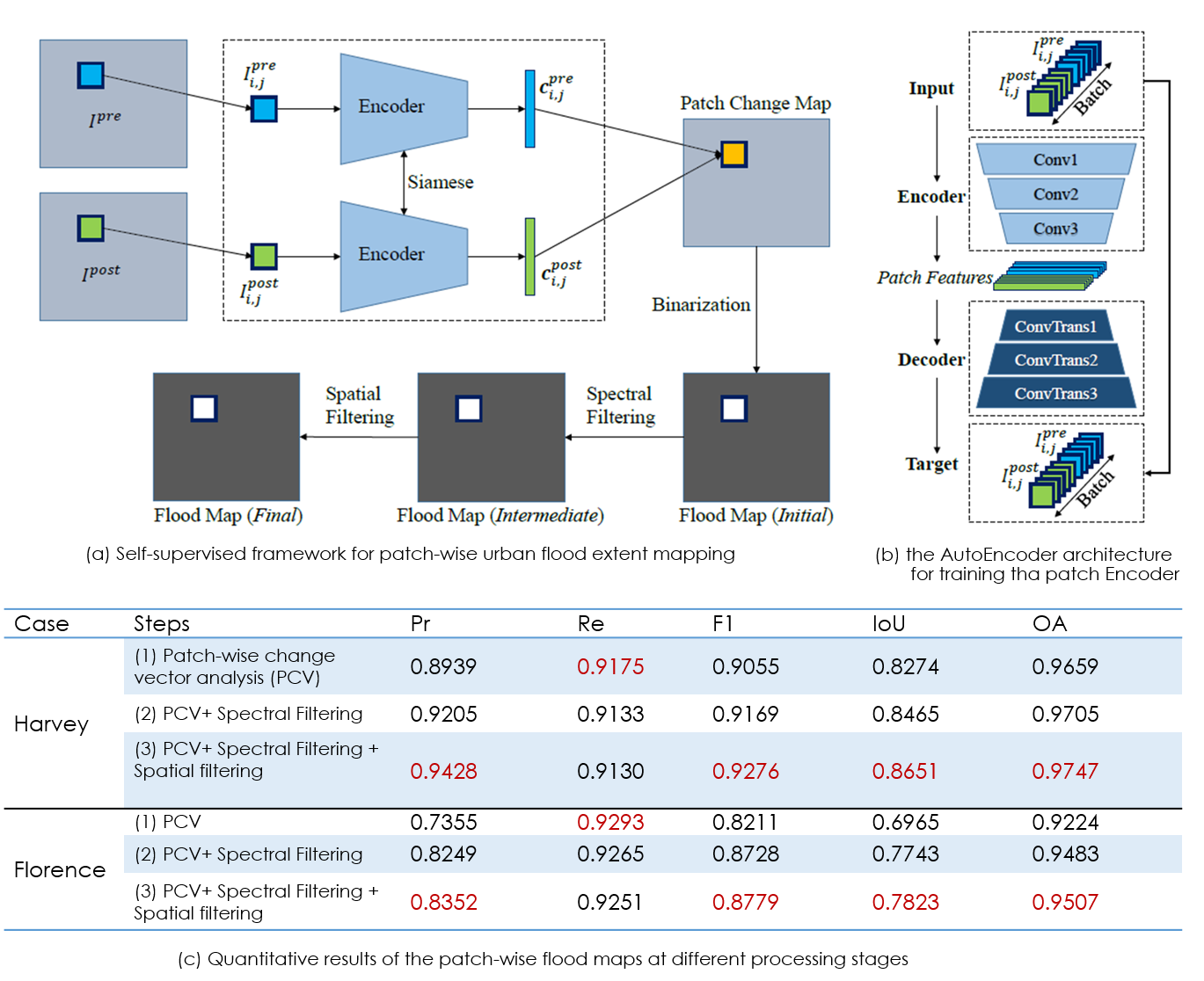 The road is long, and there is much more work to do. Next, we will focus on the self-supervised remote sensing image representation learning informed by geospatial principles for object-based image analysis (led by Bo), as well as explore pixel-wise remote sensing image segmentation models (led by Jamp) to obtain better accuracy and efficiency in real-time flood mapping.